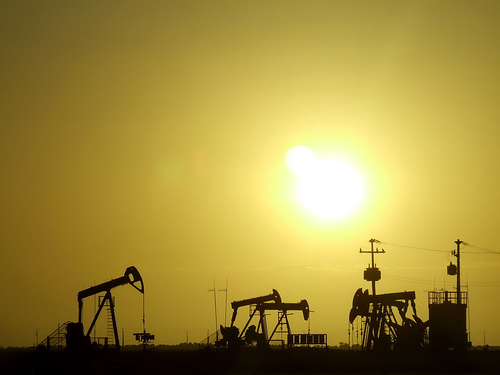 Everyone knows, or at least they should, that Spain has great potential in the field of renewable energy. In fact it has been affirmed that Spain could become the Kuwait of these types of energies.

We are one of the leaders in technology and we have a great capacity for energy already there (wind, solar, thermal, among others) and we produce a great quantity of electricity from these sources. For example onNovember 4th, 2012 at 9:00 pm when most of the energy is consumed – and produced – 11% of the total came from hydropower (in this case we will assume that it is green), 34% was wind energy and a remaining 16% came from reviewable energy sources. In total more than 61% of the total electrical energy in that moment came from renewable sources.

However electrical energy only represents a part of the total of all energy used. In 2009 (the last year we found data) this energy only represented 21.5% of the total used in Spain. The majority still comes from petroleum products. People continue moving in cars that consume gas or diesel, we also need these products to move tractors and produce food; it has also become indispensable for heating. Overall, even though our technology has advanced we still rely on the products that come from the Middle East, the place we would like to become in terms of renewable energy.

Aside from the imported gas and petroleum, are there sources of oil that could help Spain avoid its dependence on foreign oil? We know that Spain has large coal mines and even hard coal. Coal has already been covered in aprevious article so this one will include other non-renewable energies found in Spain. 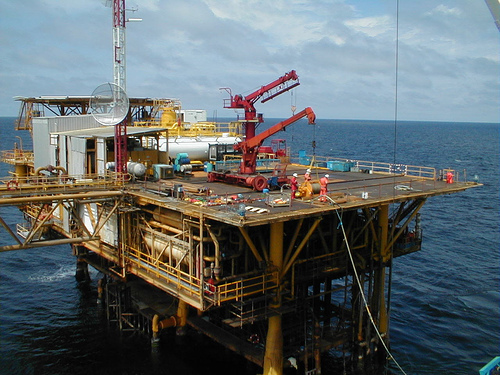 There are different places around the country where oil is extracted. The most important is reservoir Ayoluengo in Sargentes de la Lora (Burgos) with a potential of extraction between 5,000 to 10,000 barrels per day.
It is also possible to see extractions off the coasts of Tarragona (reservoirs Montanazo D-5 and Lubina -1) where up to 7,500 barrels can be obtained per day.

In total the three reservoirs (the one in Burgos and the two in Tarragona) produce about 12,500 barrels per day. However the consumption in Spain is of 1,482,000 barrels, making our own production unable to cover even 1% of our need.

Seeing this as a problem it seems like politicians have decided to reduce it, not by reducing our consumption, by increasing the amount of fuel extracted nationally and to do this a series of new explorations has been approved.

Nowadays the case of what is happening in the Canarian coast by Morocco is well known by everyone due to the controversy it has caused and the damage it could do to the pillar of the economy of the islands, tourism. However, the quantity of petroleum that can be extracted from those waters is large and enticing. According to data from Repsol, the gas and oil company that has the permit to extract, the waters around Canary Islands could produce around 38 million barrels per year, 10% of the annual consumption in Spain. 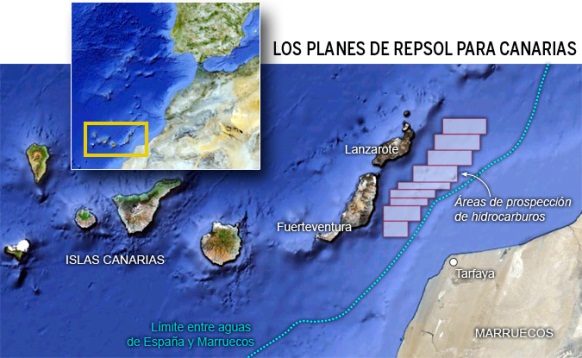 There are other places that have been or are in the process of receiving the permits for reserach.One of the most important ones is in the gulf of Valencia where (surprise! surprise!) the current government officials blame the current explorations in the gulf on the previous government (of a different political party) and say that they are not able to cancel the contract. However if the work is done 70 kilometers off the coast like it is thought (and not in the Albufera, only 3 kilometers away!) then there shouldn’t be a problem. On the other hand it is not known how much oil is in these parts. 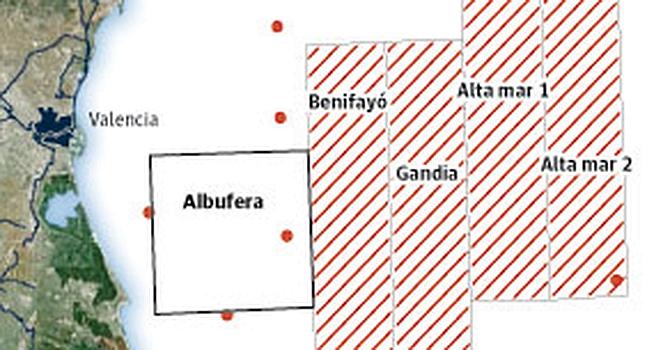 Image 3: The zones, being studied (lined) and the Albufera zone, ruled out.
Source: LasProvincias.es

There are plans to extract oil in the coast of Tarragona, according to some studies there could be up to 30 million barrels on the Casablanca platform. You don’t have to be particularly in-tuned to understand the dangers this could present to the Ebro Delta, the coast of Castellon and Tarragona.

There was also a search for oil on the coast of Ribadesella, but the last update on this is from 2008. In Andalusia permits have been handed for research. In the province of Jaen two areas will be explored, in total more than 68,000 hectares from Sierra de Cazorla to the capital of the province, passing by La Loma and Magina (image 5, in orange).

Meanwhile in Seville the area for possible exploration extends 27,208 hectares and it occupies a large part of the metropolitan area of the Andalusian capital. 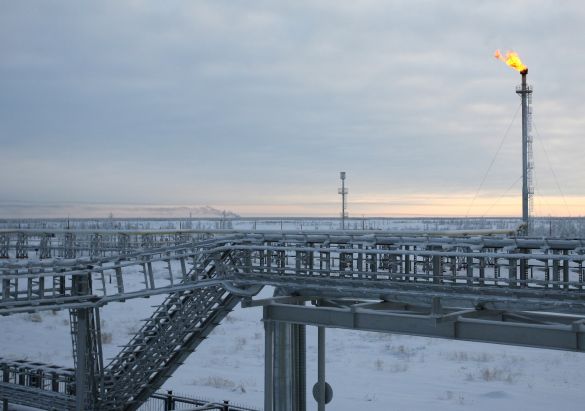 Natural gas is a hydrocarbon and it has less environmental impact when being burned than petroleum and especially coal. However, there is a lot of impact when it is being extracted, especially through fracking (click to see video).This fuels “seems” to accumulate (or at least in most of the prospects made) in the south of Spain, around Andalusia. Permits have been granted for the exploration of the border between the provinces of Jaen and Cordoba, in a zone made up of Porcuna (Jaen), Adamuz and El Capio (Cordoba), among others. 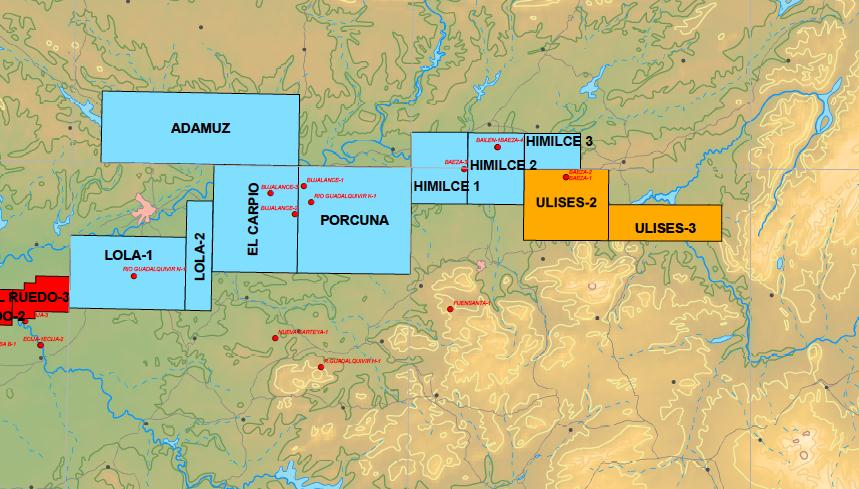 Image 5: Explorations of gas and petroleum in the provinces of Jaen and Cordoba.
Source: frackingporcuna.wordpress.com

Though it seems that, at least in the case of Porcuna, the permits are being taken away.The gulf of Cadiz in another area where there could be a high abundance of natural gas because they have found “grand” sandy deposits in the subfloor, that could mean large quantities of gas.

Finally, the last place where they want to do explorations is the Costa del Sol. This place where the first studies are being conducted in between Fuengirola and Mijas (tourist centers right on the coast) and the hotels in the area are afraid that a spill on a platform could affect the beaches. Furthermore it wouldn’t be good publicity to have platforms for extraction so close to them.

In the north of the peninsula there are also projects to extract natural gas, one of the examples is Vizcaya where a couple of municipalities have been allowed “free fracking“.

In the end, it seems like there will be a large investment of money in search of petroleum and gas across Spain, this seem like it could be beneficial for the state because it would curve the dependence on foreign energy and that money spent would stay in Spain (something that given the state of our economy wouldn’t be negative).

However, why not be a little braver and try to invest that money in energy, politics, and industries that we know would stay forever and not until the resource runs out and the wells dries up. We really could be a great leader in renewable energies but for that we might need politicians and politics that look to the future and don’t end their term straight into the leadership position of one of the big electrical companies because we might be OVER a little Kuwait bit we are really UNDER a big Kuwait.