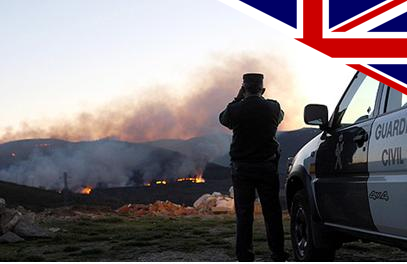 12.1% of Spanish surface is protected by legislation about biodiversity (around 6.1 million of hectares). If it is also counted Natura 2000, protected area would be over 14 million (28% of national land).

Nevertheless in this summer these spaces have lost their “protected” adjective. Large fires have burned thousands of hectares and left a black landscape which will be very difficult to return to the original situation.

Also fired surface in Natural Parks has been increased . Numbers are devastating: 4,000 has in La Gomera Island (where is National Park of Garajonay); 5,200 in Villaflor, Tenerife (National Park of Teide); or 537 in Navas de la Estena, Ciudad Real (National Park of Cabañeros). As a whole 135,000 hectares have been burned in natural spaces.

By regions, the most affected in last decade has been North-West (Galicia and Zamora or León in Castile and León) (Images 2 and 3).

In these maps are shown the actuations of the Ministry in years 2011 and 2012. The most stressing is the point concentration in North-West of Spain.

Focussing in this area, Northwest of Zamora –and specifically around Natural Park of Lake of Sanabria- has been one of the most affected area by fires. 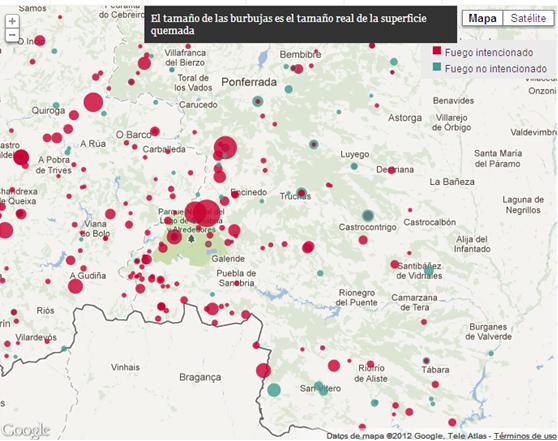 In image 4 can be seen position and size of fires around the Natural Park and, also, which is its origin (natural or anthropic). Majority of them are deliberated and produced with speculative or farming goals. Attending to MAGRAMA’s reports the main cause is to get pastures from areas  which are nowadays covered by forests or bushes.

The most extended vegetal formation in this area is the Pyrenean oak forests. Through fires their extension has been reduced around 31% in last years!!

Traditionally the main activity of Sanabria has been ranching and historically has been damaged by fires in summers. However in last decade this process has been emphasized and probably this increasing has not been just for drought and high temperatures (because they have also increased in autumn and winter), so it must exist specific goals for these fires. Also should be analyzed another factor, in last years (2001-2012) has been reduced the people to prevent fires.

Different solutions are been studied to reduce them. Public administrations (Town halls and the regional government of Castile and León) support to install cameras as a measure designed to act as a deterrent. People, however, prefer more budget to clean forests and prevent fires in autumn and winter (it would increase also the employment).

There are also been carrying out positive experiences like Project Self Prevention, promoted by Duero-Douro European Grouping of Territorial Cooperation. This project is about reintroducing goats to clean the forests and prevent.

In my opinion whatever measure should be welcome to try to reduce fires and burned surface.

The solution can be taking these measures to reduce the environmental disaster: increasing budget, cameras, more people to prevent or introduce (again) goats to clean the forest. By myself, I support whatever new idea which protects this Natural Park and avoid that this black surface continues be increasing.